The Tintagel tapestry shows some of King Arthur's knights at a banquet, eating Cornish pasties (photograph below). Of course, they didn't wear suits of armour at the table when they were eating their pasties. You can also see the Round Table with the grail. The location of the grail seems to raise a lot of curiosity these days so perhaps we'll tell 'ee more about this d'reckly.

The fact that we see the Round Table, the grail and a member of the Round Table addressing the central figure as "Sire" all point to this being the only known contemporary illustration of Arthur. 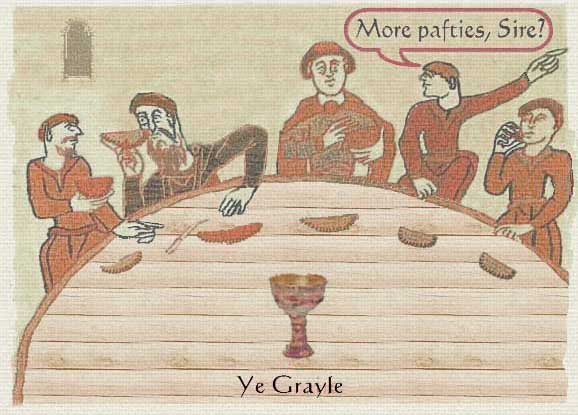 A section of the Tintagel tapestry.


The Bayeux tapestry dates from soon after the Norman conquest of Britain, after the Battle of Hastings in 1066 AD. The Tintagel tapestry pre-dates this by about 340 years - to find that Arthur is placed in history around 600 AD, just put "king arthur 600 ad" into the "Google" electric computer thing and see what you d'see.

The identity of all the people shown is not known yet and further research is proceeding into this matter by my learnéd friend and fellow pasty historian, Mr Henry "Oggy" Trelissick (a Member of the Ancient Order of Pasty Antiquarians).

Interestingly, the pasties all seem to be hen pasties which tells us that they were all made by a right-handed cook.

In case you can't see the pasties clearly in the picture above, here is a closer view ..... 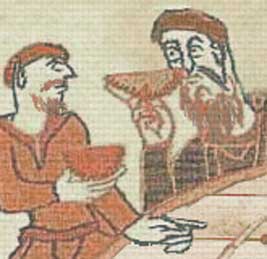 A closer view of'n to show the pasties more clearly.

The figure on the right in the closer view looks remarkably like Cormoran, the giant who lived on St. Michael's Mount. This is interesting because it is known that he was there in the time of King Arthur (see here) - perhaps he was invited to the banquet as a political move, otherwise, because of his appetite, he might have come anyway and eaten all the pasties for hisself? It was well known that you didn't ought to upset Cormoran ..... you can see he already has the biggest pasty waiting on the table .....

Once again, The Cornish Pasty endeavours to bring 'ee nothing but the facts.