Memories of a pasty grower's son

The Cornish Pasty web site is a "spin-off" from a web page about Cornwall, now hosted on Dartmoor CAM

That page, among other things Cornish, contained the recollections below from my childhood.  I had a fortunate upbringing, albeit we had some hard times on the farm.  Father was really a "grower" even though we had quite a few chickens and pigs and he used to borrow "Gosham", a shire horse, to pull the plough.  He grew mainly flowers and tomatoes and, of course, the pasties. Some sixty years on, I still treasure a horse-shoe thrown by Gosham in one of our fields!

The tomatoes were grown under glass for the local shops and hotels (these were for the summer Visitors).  He came from the Scilly Isles where growing and fishing were a way of life.  The islands are particularly well known for their early flowers and where we were in West Cornwall (outside Hayle) was not far behind with its local climate.  The flowers he grew were violets (they was little devils to pick and bunch), polyanths, anemones, irises but mainly daffodils and narcissi.

Incidentally, some of the tomatoes were sold in RO Clemence's shop in Foundry Square, Hayle. A photograph of Mr Clemence and his shop can be seen here. He later became my Father-in-law .....

Father was well-known for his pioneering work with growing freesias in Cornwall. This was under glass in the winter/spring.  He collaborated with Rosewarne Experimental Horticultural Station, Camborne (then Ministry of Agriculture, but now a campus of Duchy College, Stoke Climsland, Callington). The flowers were taken to the GWR station at Hayle for carriage to the English markets at Covent Garden, Bristol, Birmingham, Manchester, Doncaster and Sheffield and also to Cardiff, Glasgow and Edinburgh.

There are two types of pasty - the natural one and the made ones. Each type has two sub-groups:

Classification of the Cornish pasty

The following account is reproduced from the "Cornwall" web page, about growing pasties 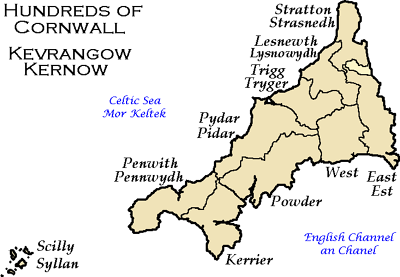 Webmaster never travelled much east of Camborne, that is, "up-'underd" until he was 18!

The main reason for not travelling far abroad, into the next parish, let alone the next Hundred (Kerrier), was that with Father being a farmer, life wasn't easy, tending the land as we did. My main job when I was a boy was tending the orchard where we had the pasty trees.  These were hidden in among the quince and the cyder apple trees, where the Visitors wouldn't ever get to see them.

There seemed to be a lot of mystery about all this, although why, I never could tell. I took a Visitor in to see them once, as a special treat, but 'ee said 'ee couldn't see them at all!

Damn funny, thought I, where the h*## do 'ee think the pasties d'all come from, then?

Tending the pasty trees was a everyday job, even in the winter time, when the pasty buds were dormant. The busy time, apart from the picking season, in spring and summer, was the pollination of the new pasty flowers in the very late summer, after the Visitors were gone.

This had to be done in the misty early morning, by hand, with a rabbit's-fur brush, because the pollen is so very light, you see, that the slightest breeze will take it away from the female pasty flower and you d'get a very poor crop if 'ee idn't dunn right.

Of course, what I'm telling you above is all about the cultivated pasty trees, what a lot people much prefer is the the rare and much sought-after cliff-top wild pasty - this is a genuine gourmet delicacy. These are plantation escapes whose seeds have been spread by low flying shite'awks. The harsh cliff-top conditions mean that the crust becomes thicker than normal and has to be cracked with a mallet, but, oh, the concentrated flavours within ......."

The Cornish Pasty web site endeavours to bring you only the facts about the Cornish pasty.