Hands off our pasties 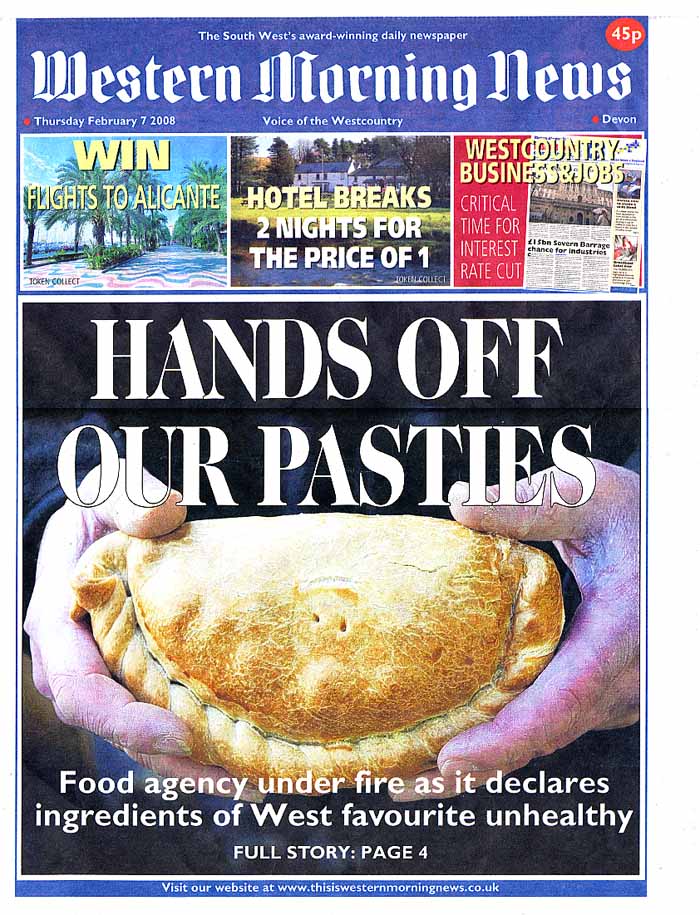 Copyright: This image is presented with kind permission from the Western Morning News

"The diet of the average British adult contains too much saturated fat, added sugar and salt. Since 2004 the Agency has been working with industry to reformulate foods to reduce the amount of salt they contain, along with communicating the health impacts of a high-salt diet directly to consumers. It is now extending that focus to saturated fat and the balance of calories we need."

Nutritional figures for pasties can be found HERE.

Pasties were mentioned, with regard to fat, along with foods that are (1) often high in salt, such as processed meat, cheese, and smoked fish, (2) high in sugar, such as sweets, chocolate and fizzy drinks, and (3) tend to be high in fats, such as butter, margarine, mayonnaise or salad dressings, full-fat cheese, cheese spreads, meat pies, fried foods, salami, cakes, biscuits and pasties.

Another FSA web page (HERE), says that removing visible fat can make a big difference to the fat content of meat. In fact, lean red meat is quite low in fat at 4-8 g per 100 g. When the lean and fat components of meat are blended together in mince or meat products, then the fat content can be much higher. Meat products, whether they've been made from red meat or poultry, can also be high in fat because of the other high fat ingredients they contain, such as the pastry in a meat pie or pasty.

The "Hands Off Our Pasties" headline flags up the fact that the pasty contains a certain amount of fat - as do other foods. The editorial contained more common sense on the subject than I have heard in a long time. It was linked here but newspaper online archives tend to disappear after a while, to save web space.

Obesity is a problem today - but don't blame the pasty! In fact, in all my younger years in Cornwall (eating pasties), I don't remember anyone being obese. Mind you, a few men who drank more beer than they should did develop corporations (slang) .....

It is also true that the pasty is a high energy meal - it was bleddy meant to be! It was meant to sustain miners and farm workers who laboured long and hard .......

Many people today are less 'physical', sitting in front of computers and televisions, driving cars instead of walking and eating more plentiful food, This includes processed food with added extras and this contributes to many of us being overweight - whether we eat pasties or not.

The message is to eat sensibly. To quote Billy Connolly on obesity "Eat less, exercise more".

A tip from my childhood - you don't have to eat your pasty all at one sitting, you can save a piece for drekkly! That is why we had our initials on one end, so's we could tell whose-was-whose later on.

Another tip is to make or buy smaller pasties .....

The pasty has always been a satisfying meal, you don't usually want anything else for a long time afterwards because you don't need it. Also, they are good, wholesome food, with real meat, unlike the ground-up, waste-nothing shennanigans that goes into the modern burger. I know which I prefer!

The press release referred to saturated fat and the balance of calories.

As a spokes person for the Cornish Pasty Association said in the Western Morning News article:

"A proper Cornish Pasty hasn't got massive amounts of fat in it. There is no saturated fat in our pastry. There is saturated fat in meat, but if you use good-quality meat it is what would be classed as a normal diet. We need to fight back - a good Cornish pasty is a balanced meal".

So say we all ..... especially with lean meat and pastry with no saturated fat.

"Hands off our pasties"

Logo reproduced by kind permission of the
Cornish Pasty Association, 2008

These are acknowledged with thanks from The Cornish Pasty.