Oggy Night is essentially a celebration of the pasty, or at least involving the pasty, that I found while researching the origins of tiddy oggy and related words.

The information is found on the Memories of Singapore web site, on this page.

The official description of the event appears HERE, and is reproduced below, with permission .....

The origins of "Oggy Night"  are lost in the mists of time, and can be summed up by the phrase "Mad English living abroad", but can probably be traced back to inter-dockyard rivalries, as the Dockyardies from Scotland had Burns Night as an excuse for a social event, the Devonport Dockyardies invented "Oggy Night".

For the uninitiated, oggy is the local dialect name for a Cornish pasty, more correctly a "tiddy oggy" but always shortened to oggy by locals.

The social evening events comprised the baking of an enormous pasty, which was then carried into the hall on a gun carriage towed by the gents dressed in country yokel smocks & gaiters, the participants then performed a maypole dance with ribbons tied to the ceiling fan, sang The Oggy Song (you really don't want to know the lyrics, they need a Cornish dialect translation book), the oggy was then duly blessed by Bishop Oggy, and the oggy was then cut up and distributed among the guests, followed by many pints of "Tiger Beer".

Of course, no event is complete without an official photograph - and here it is ..... 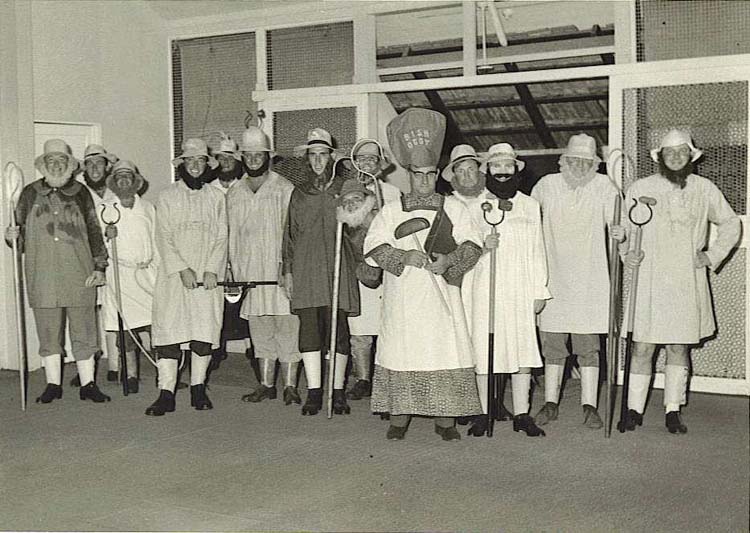 I have been trying to discover if Oggy Night is currently celebrated in Devonport Dockyard, Plymouth. My son-in-law, who has so far spent his working life in the yard, cannot find anyone who has heard of it. I visited a 93-year-old former neighbour yesterday (24 Apr. 2008) who retired from the yard in 1979 but he had no recollection of Oggy Night in Devonport. Also, I don't remember my maternal grandfather, who spent his working life in Devonport Dockyard and who retired in 1950, ever mentioning it. He died in 1961.

In all probability, Oggy Night was exactly as described above - an invention by Devonport Dockyardies in Singapore as an excuse for a bit of a "do" in answer to Scots colleagues celebrating Burns Night. I think it is an excellent idea and I propose that it should be revived and celebrated on 5th March to celebrate St Piran's Day, or possibly the night before, as St Piran's Eve?

Acknowledgement: Many thanks to Tom O'Brien, Memories of Singapore webmaster, for permission to reproduce the description and photograph of "Oggy Night" here - it is a very noteworthy account relating to pasties.

Again, many thanks from The Cornish Pasty