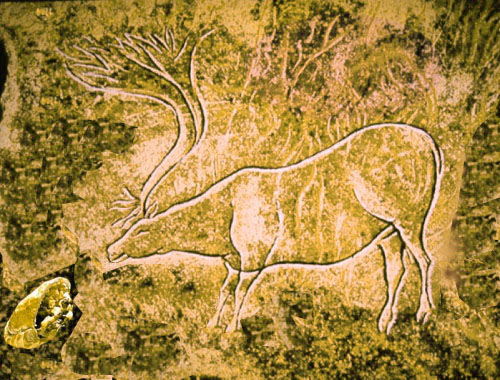 The Cornish Pasty can tell you about the Scilly cave-painting, famous for its connection with pasties, that was formerly visible in Piper's Hole, a cave at the north end of Tresco, Isles of Scilly, before the Great Storm did its damage. In olden times, the cave went all the way to its namesake at Peninnis, on the island of St Mary's - hence the reason for the caves having the same name.

The photograph above was taken with one of the first Polychrome® colour plates ever to reach the Isles of Scilly. The person who took it was my great grandfather, Great Grandpa Jan Jenkins Trevilisk, in 1873. He was not a photographer but on that day he was guiding one of the first Visitors to Scilly,  Professor James Maxwell, the Scottish scientist who invented an early colour process in 1861.

Prof. Maxwell visited the Isles of Scilly in 1873 because he had heard about this painting that could change thinking about our history. He was taken to the cave with his new-fangled camera box and its gert big tripod to see the painting. However, when they reached the lake, which is in the cave, he was fearful for his well-being and told Great Grandpa how set up the apparatus and make the exposure.

Great Grandpa said afterwards that "the exposing of the photographic plate took bleddy ages" because there wasn't no flash in those days and the candle kept blowing out with the draught in the cave.

The painting shows a elk eating a pasty. If you look carefully, you can see his friends are waiting their turn in the background, so it must have been a good one.

It is said that this pasty could not have been a shop one because, at that time, there was no shops! There was also no gas nor electric to cook it by. Therefore, logic says that it MUST have been a wild one, because there was also no orchards for pasticulture in the area that we know of - although that is a point of learnéd debate (see below).

We have found little evidence of remains in Cornwall being dated to before 3000 BC, although it is believed that man was around before then. This is believed because at one time the whole area was covered with trees, but from about 10,000 BC clearings in the forest began to be made by small groups of people who the original hunter-gatherers.

Remains of flint tools from the Mesolithic Period or Middle Stone Age (approx. 10,000 - 4,500 BC), have been found. It is believed that a lot of the trees were the original pasty forest. All that remains of the original wild trees now are the occasional pasty groves or "orchards" as we call them.

Here is a useful description of some of the early history .........

Source: http://www.rootsweb.com/~irlkik/ihm/ancient.htm
The table is meant only as a guide to some of the early Irish epochs

While the second table, immediately above, is descriptive of epochs from an Irish viewpoint, they are probably applicable to the same periods for England, Cornwall & Scilly.

In the Neolithic Period or New Stone Age (4,500 - 2,300 BC), the wandering people settled down and developed farming: farms and reeve field systems were built and some wild animals were domesticated. They also started gathering seeds from useful plants and putting them into their field systems, starting the growing of crops. Forest clearance continued. It is believed some forested areas were conserved because of the continued need for pasties before the shops opened.

Obviously, one important crop domesticated in the region that became Cornwall was the pasty crop.

In the late Neolithic Period and early Bronze Age (2,300 - 700 BC) the people built various monuments, including stone rows and circles, and buried their dead under stone mounds or cairns. It is believed that the stone rows were used as astronomical calculators to predict the return of the Black Night Hawk Moth. This insect was important in the pollination of the wild pasty trees.

The archaeology of Cornwall and Scilly is important, with evidence on land and below the present high water mark at Scilly indicating that the place has been settled for at least four thousand years.

Of course, at the time we are speaking of, there was no Scilly and Cornwall because the sea was further out and it was all one land mass - part of what was Lyonesse.

Anyway, the evidence suggests that the painting above is from about 2,000 BC - so he is about 4,000 years old. That is back to the time of Christ, and then that far AGAIN. That makes it a very old pasty!

Footnote - On the day Great Grandpa took the photo above, the family suffered a terrible loss.

In all the excitement and the shoutings of Prof. Maxwell, about how to move the candle about to get the photographic plate properly exposed, Great Grandpa put 'is pasty down on a rock.  'Ee forgot to pick'n up again! If anyone ever gets that far into the cave in the future, the family would like to have'n back. We could always warm'n up. Thank you.

I imagine this might be something you didn't know before about pasties because not everybody knows about our family history, another 'first' for The Cornish Pasty.