Dear Pastyphiles - The Cornish Pasty is aware that there is a lot of other pasties around the world.

The pasty has been around a long time, as shown on other pages e.g. as listed under "Origins of The Cornish Pasty" on the Contents electric web page

Some of the pasties below aren't quite the same as ours, some are fried and not baked, while some can be cooked either way. When they are fried, they may be deep or shallow-fried. Also, some may be steamed. Also, they can have different fillings, even curry and other exotic foods .....

Other Latin American pasties/empanadas are found in the countries listed below. 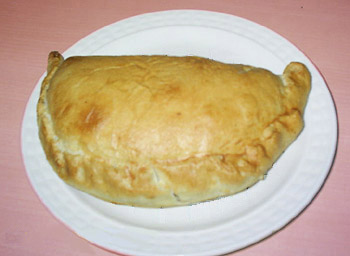 Source: http://en.wikipedia.org/wiki/Empanada
Chilean empanada
(it looks like a pasty, to me)

"In Spain, Portugal, the Caribbean, Latin America, and the Philippines, an empanada (Portuguese empada- a different dish) is essentially a stuffed pastry. The name comes from the Spanish verb empanar, meaning to wrap or coat in bread. Usually the empanada is made by folding a thin circular-shaped dough patty over the stuffing, creating its typical semicircular shape. Empanadas are also known by a wide variety of regional names (see the entries for the individual countries below).

It is likely that the empanadas in the Americas were originally from Galicia, Spain, where an empanada is prepared similar to a pie that is cut in pieces, making it a portable and hearty meal for working people. The Galician empanada is usually prepared with cod fish or chicken. Due to the large number of Galician immigrants in Latin America, the empanada gallega has also become very popular in that region. The idea of an empanada may originate from the Moors, who occupied Spain for 800 years.[citation needed] Middle Eastern cuisine to this day has similar foods, like simbusak (a fried, chickpea filled "empanada") from Iraq."

Without going into great detail about all the Central & South American varieties except for these that already linked to above .....

The Pastypaedia is presenting only notes from Wikipedia - Empanada, mainly about their fillings .....

Concerning the origins of the empanada, Wikipedia - Galicia notes that the the original empanada probably came from Galicia, Spain. The name of this region of Spain comes from the name of the Celtic tribe that occupied the region (the Gallaeci) before the Roman invasion, in 136-137 BC.

Therefore, we have another Celtic connection .....

You can learn a lot from The Cornish Pasty web site!