This Cornish pasty web page describes pasties with something special in the end - a sweet bit to round off your meal.

17 Aug 2009. In case we Cornish have forgotten this tradition, the Finnish miners haven't - see HERE, on The Recipe Link web site.

My mother made these when I was a boy in Hayle, West Cornwall, and I recently learned that my wife's Auntie Hilda also made them, also in Hayle. There were probably other families in the area who made them because we probably weren't that special. Mother stopped making them after Sammy Philp's pasty shop opened in 1958 - over fifty years ago!

I have seen some nonsense about these pasties, both in books and on the electric internet. Some people think they are a figment of the imagination, well, they aren't, they are real. It is true that they aren't heard of much these days because they mean extra work, extra ingredients and extra care in the making - they are not something that you find in pasty shops, these are real, home-made pasties.

Some writers refer to them as sweet and savoury pasties although I never heard that when I was a boy, that is a modern invention and it don't mean a lot to we.

Others call them "double-ended pasties" - that is silly because all pasties have two ends. I am sure if there was a pasty somewhere with only one end we would have heard about it by now?

The main part of the pasty is as in any other pasty - potato, turnip (meaning yellow swede), onion and chuck steak (normally skirt beef is preferred but chuck is a reasonable substitute) beef with a bit of salt and pepper. The other end of the pasty is separated from the main part by a finger of dry or stale bread. This forms a barrier against mixing of the fillings and it absorbs some of the moisture given off during baking. The sweet filling in our house was cooking apple mixed with dry sultanas. These also absorbed moisture and become succulent by doing so. The cooking apple was sweetened with a little brown sugar. My own contribution, I like to think 'tis mine own, is to add a good pinch of ground cinnamon.

The basic recipe is my Auntie Ann's, put down for posterity in The Pasty Recipe, a poem written by Cousin Mark. The only extra is a pinch of salt in the pastry. 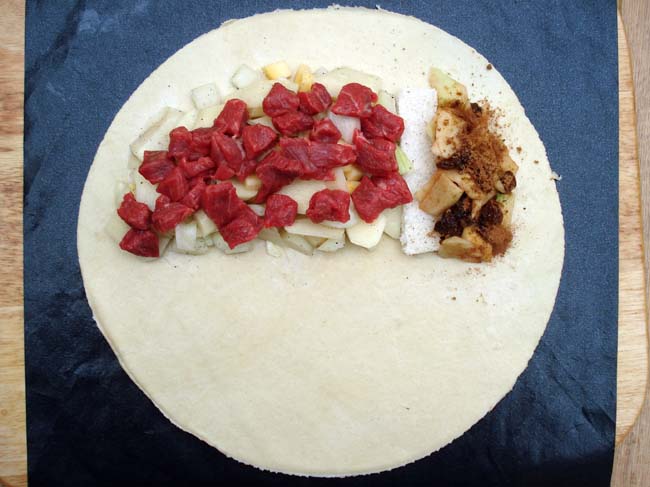 Pasty with "afters" in the making
The main filling is potato, turnip (meaning swede), onion and chuck steak.
The sweet filling at the right is apple, sultana, brown sugar and ground cinnamon.
The two fillings are separated by a finger of dry bread. 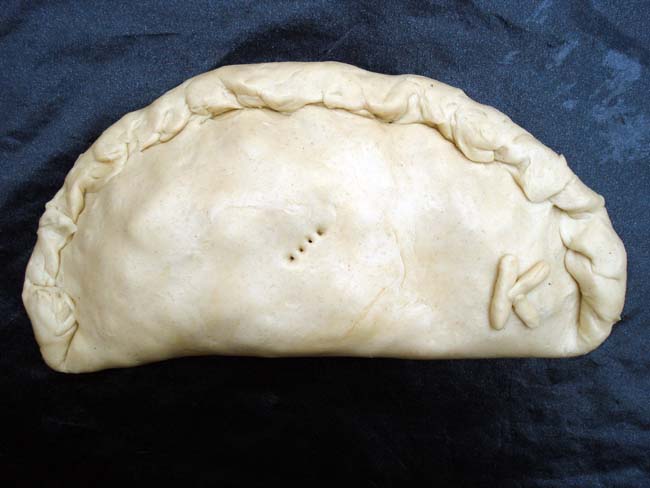 Pasty with "afters" before baking
The "afters" end is marked with a "K", for myself
to indicate whose pasty it is in the normal manner. 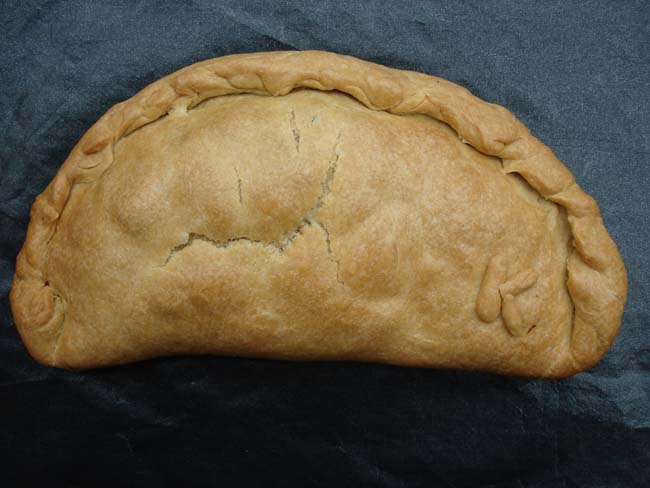 Pasty with "afters" after baking
The pastry has split slightly during handling out of the oven.

Second pasty with "afters"
This one was for my wife, marked "B".

The only other thing I can tell 'ee about the pasties is that they tasted bleddy 'andsome! 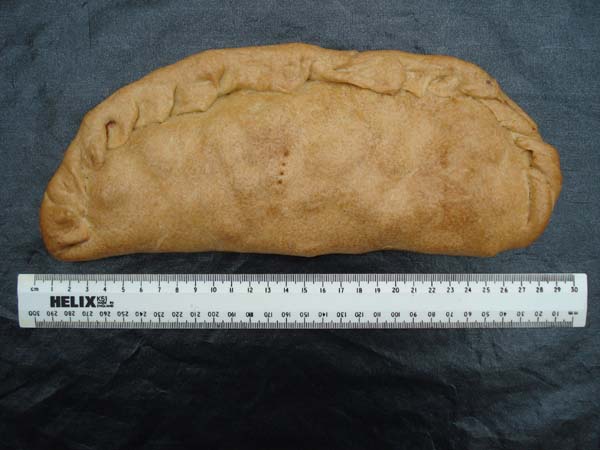 Third pasty with "afters"
With a ruler to show the scale - not too small.
The sweet end is again at the right side but with no initial for a lucky visitor .....

While the original Pasties with "afters" web page is true, there is more to say.

Our pasties with "afters" contained cooking apple because we had an apple tree, they were not normally bought apples. I'm remembering back, here, to the period 1949-1958, over fifty years ago.

One useful piece of information to give you is that one thickness of everyday sliced bread is probably too thin. I think two thicknesses would be better at keeping the pastry from collapsing slightly in the border area between the two fillings.

If the truth be told about these pasties, the apple "went away" to almost nothing in the baking but the dry sultanas swelled up and were very succulent. To say they were full of apple at the "afters" end after baking would be misleading.

That said, I plan to experiment with other options that are available today, such as dried apple, dried apricot, dates and figs - although I am not too sure about the figs! Cherries also sound good. Hopefully, some of the moisture produced during baking will be absorbed by the dried fruit and will leave the "afters" end with more succulent bulk to chew on.

I am contacting The Cornishman newspaper to see if they can carry a news item appealing for information about memories and recipes for these pasties. I have also sent an electric email to BBC Spotlight, the local television news programme - where one of the presenters is a proud Cornishman who likes his pasties! The idea is to collect and record folk memory before the generation that knew these pasties is gone.

16 Aug 2009 - BBC Spotlight referred me to BBC Radio Cornwall, I am awaiting a further development - they will call me back next week to organise something "on air"!

We have solved the mystery! Last night Sister Kay told me that Mother used to put "a piece" of apple in the pasty.

Today I made a series of test pasties and my wife and I had a pasty "afters" end tasting session.

The pasties were just "testers" - pasties with different sweet fillings at each end, all starting with a slice of apple that was the thickness of a piece of sliced bread: 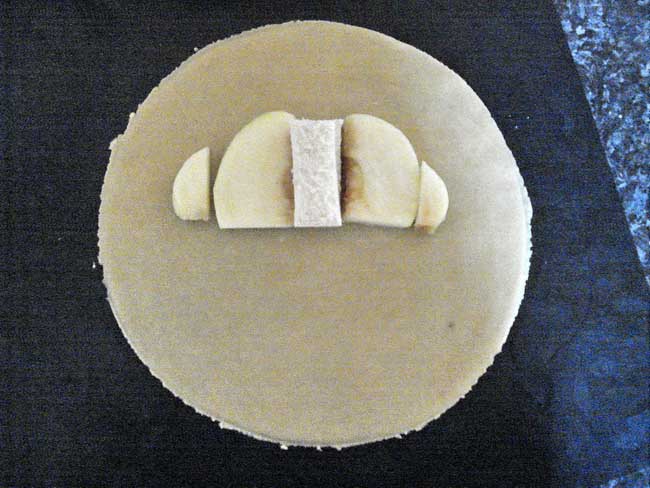 Test pasty with afters in the making (here, test "afters" at each end)
This stage simply shows the pastry, bread divider and base layer of cooking apple.
The slice of cooking apple was the thickness of a piece of sliced bread.

The fillings tested were:

The apple layer was a great success - while it shrank a little there was a clear bed of apple left in the pasty.

The other aspects are a matter of personal taste:

Ground cinnamon was added to the apple in all the test pasties.

In summary, the bed provided by the slice of apple and all the other fruits were very successful, providing you want a traditional Cornish pasty-with-afters - as we now do!

Perhaps the traditional Cornish pasty with "afters" will now make a proper come-back? It is at least fifty years since we had them in our family ..... and here I be, a 63-year-old pensioner, a farmer's boy, making my own pasties - what is the world coming to?!

Once again, The Cornish Pasty brings you the facts .....

Again, The Cornish Pasty brings you nothing but the facts ...... seeing is believing ..... so's eatin'n!