Another gem of British literature, this excellent 96-page book about The Cornish Pasty is currently out-of-print, although you may find it through a library. 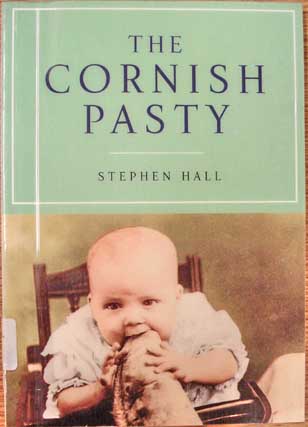 The chapter headings give a clever, alliterative idea of the contents:

One of my favourite topics, as witnessed on several pages of this web site, is crimping i.e. hand-finishing of the pasty: just put 'crimping' in the Google search engine on the home page of The Cornish Pasty. This book very neatly suggests a way to avoid the argument about side or top-crimping by suggesting going in-between with offset crimping, in Chapter 1.

The Pasty Past chapter goes into the origins of pasties in some detail, mentioning some famous old texts, namely:

This shows the standard of research that has gone into the book.

Page 49 has a photo of the Cornish rugby giant pasty tradition, with the caption "Hanging the ceramic pasty on the crossbar at the County Championship final, Cornwall against Durham in 1908."

Page 82, in the Pasty Patois chapter, defines figgy duff as consisting of dough, raisins and fat baked in a pasty form, known also as hobbin or hobban. Page 83 defines a tetty hoggan as a potato pasty, harking back to hard times when meat was beyond the purse of poor families..

This is a good book for pasty aficionados with a tremendous amount of information of which it is only possible to present a 'taster' here. If you want to know more, you'll need to read the book - it's all about The Cornish Pasty!

Acknowledgement: Our grateful thanks to Sara Hudston (MCIPR), Watershed PR, Bridport, Dorset, for kind permission to use the image of the cover of "The Cornish Pasty".